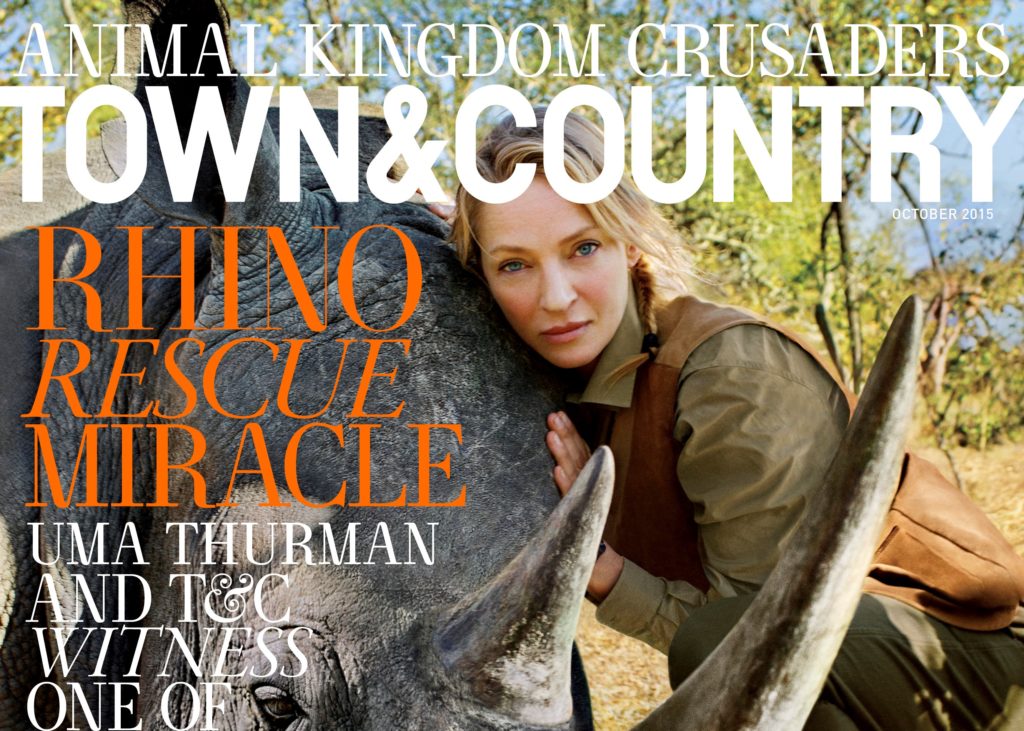 As if she didn’t have enough to keep her busy, actress Uma Thurman has a keen interest in rhino conservation in Africa. Wilderness Safaris, long a player in the same, recently teamed with Explore, Inc. to coordinate an experience for Thurman to travel to Africa to learn more. The result was captured on the cover of the October 2015 issue of Town & Country – and in an 18-page spread inside. Thurman and Town & Country Travel Editor Klara Glowczewska traveled to Africa to learn about “rhinocide” and Wilderness Safaris’ efforts to translocate the animals away from poachers to safety in Botswana. Glowczewska’s piece – “Africa’s Ark” – beautifully describes the experience and Thurman’s true passion for the cause. It also prominently features Keith Vincent (Wilderness Safaris’ CEO), Map Ives (Botswana’s national rhino coordinator) and Kai Collins (the group’s environmental manager), and applauds Wilderness Safaris’ substantial financial and manpower contributions to the effort. The photography throughout is stunning, with shots of Thurman interacting with animals and images of Ives and his team. The adventure was also summed up in a 3-page feature, “Eight Adrenaline-Fueled Days Rescuing Rhinos in South Africa and Botswana,” in the Fall/Winter issue of Town & Country Travel. T&C and T&C Travel are great scores with circulation of 480,207 and VPM of 233,237.

Luxury is on the map at last in Hwange National Park, and Robb Report is all over it. Thanks to a press visit we arranged for Bruce Wallin back in May, the magazine recently featured Wilderness Safaris’ new Linkwasha Camp in “Linked In” in the September 2015 issue. The article, which ran in the “Front Runners” section, identified Linkwasha Camp as being on the leading edge of Zimbabwe’s reemergence on the safari scene and detailed camp features and the spectacular wildlife guests are likely to see. With gorgeous photos, it was a nice slice of publicity for Wilderness Safaris and a fabulous escape for Robb Report’s 101,465 readers.

Tradewind Aviation is one of the newest clients to join the agency, and within the first two weeks of working together, we were able to secure some fantastic coverage. The company is flying high with new routes, and HIPR has been hard at work keeping coverage aloft. As a result of our proactive media relations efforts, travel writer Elaine Glusac plugged the airline’s new Westchester-Boston and upcoming Westchester-Stowe routes, the latter of which Tradewind Aviation is expecting to roll out in December. The coverage, included within a roundup article called “Air and Rail News: A Scenic Train in Scotland, Boston-Westchester Flights,” ran in the online “In Transit” section of The New York Times on September 14 for a total of 29,330,937 impressions.