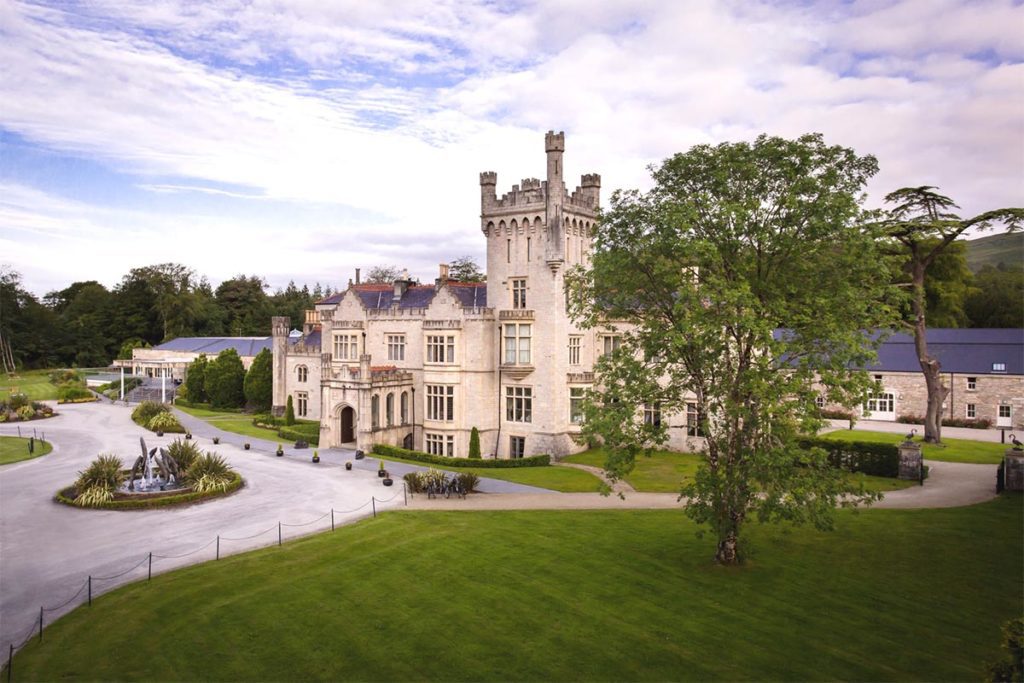 Raise The Curtain For These Second-Act Hotels!

Last year was dubbed the “International Year of Sustainable Tourism for Development” by the United Nations World Tourism Organization. Since then, the trend has only continued to gain momentum, with travelers continuously seeking new ways to recycle, reuse, and repurpose, and otherwise minimize their hospitality footprint. But there are some hotels that have been ahead of the trend since first welcoming their very first guests by repurposing the very foundation of their identity – the buildings themselves.

Hotels that were once used for entirely different purposes give historic buildings a second life, sustaining their heritage by incorporating pieces of the past into their aesthetic, identity, and guest experiences. From Boston’s XV Beacon, once home to notable tenants such as Boston Transit Commission and the Rapid Transit Commission, to Arizona’s The Wigwam, originally built as lodging for Goodyear Tires ranch suppliers, hotels far and wide have recycled their footprint to offer guests a unique stay rooted in their storied pasts. 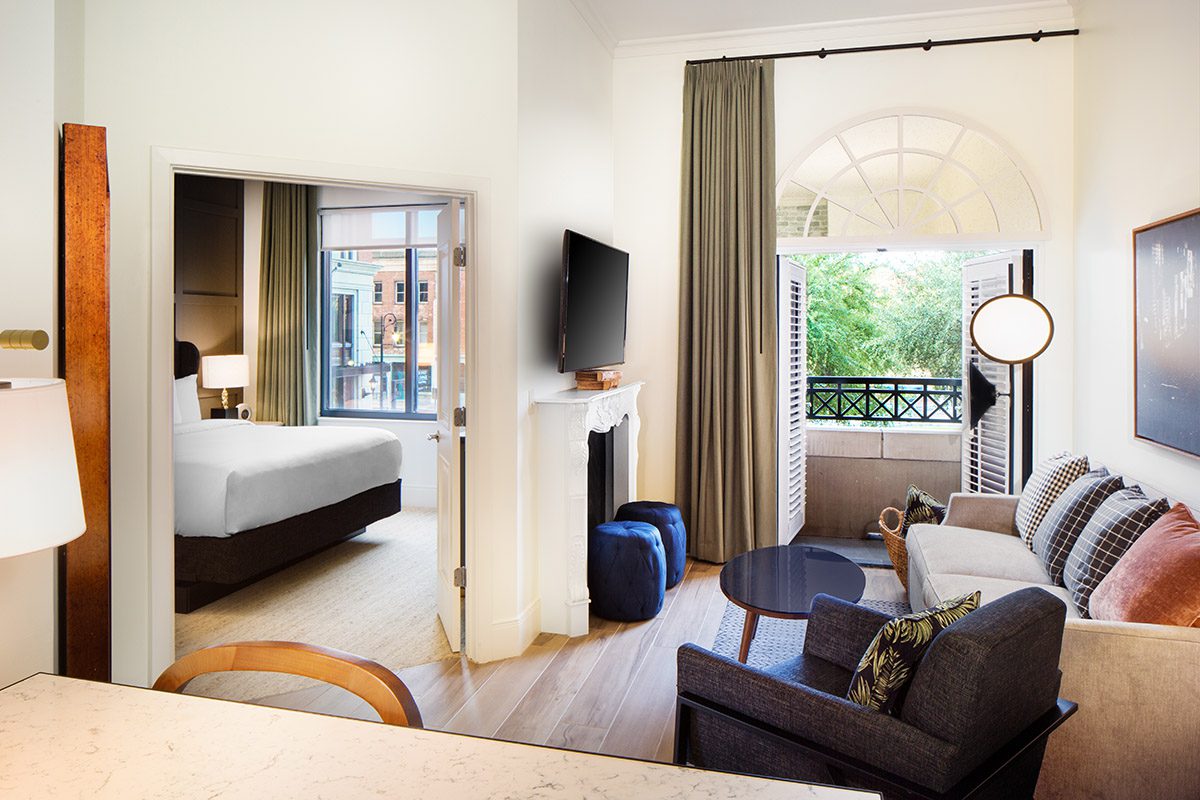 Sitting in the heart of Savannah’s Historic District, Andaz Savannah is just off of Ellis Square and around the corner from City Market, where the former local paper, Savannah Morning News, used to be. The hotel building is located on the site where actual newspaper printing took place, while the buildings adjacent to the hotel sit in the newspaper’s original office buildings. Andaz Savannah is now home to 151 newly-renovated guestrooms, which completed an enhancement this spring to offer guests a chic and cozy welcome to the South. 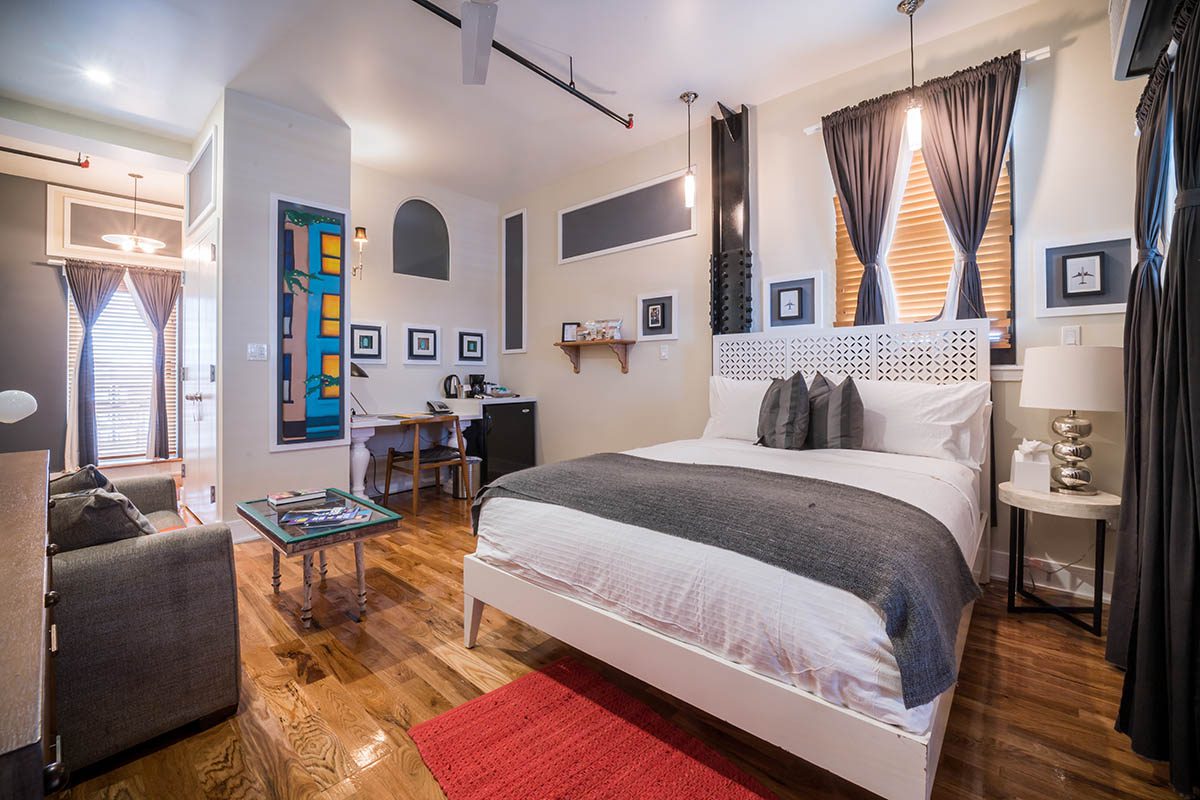 A quick subway ride away from Manhattan, Greenpoint is Brooklyn’s up-and-coming neighborhood. It’s perfect for those looking for an authentic Brooklyn experience, complete with vintage shopping and hipster cafes. Greenpoint was always known as an industrial hotspot and has recently become a hub for real estate and art professionals. Taking inspiration from their surroundings, The Box House Hotel and Henry Norman Hotel have taken up residence in a former factory and converted 19th-century textile warehouse. Each property features spacious loft suites with soaring ceilings, factory details, and kitchenettes. 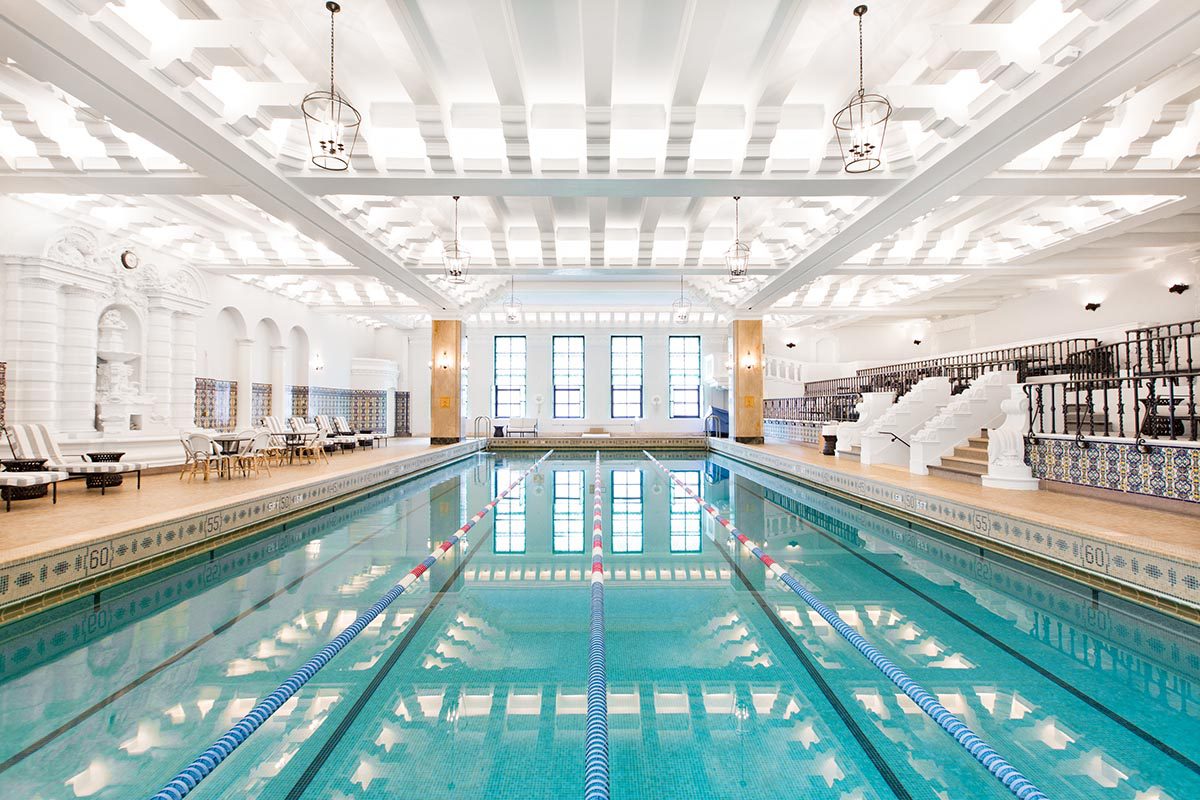 The 42-story tower was first commissioned by the Shrine Organization to become the future home of the Medinah Athletic Club in Chicago, which featured a twenty-third floor miniature golf course, shooting range, billiards hall, running track, gymnasium, archery range, bowling alley, two-story boxing arena, and a junior Olympic size swimming pool. The club’s 3,500 members and their respective guests had access to all of the ballrooms, corporate meetings, and 440 guestrooms in addition to the athletic amenities.

The pool is one of the hotel’s few features that remains untouched to this day. During the time of its debut, it was one of the highest indoor pools in the world, and today is commonly referred to as the Johnny Weismuller pool — a testament to the famous Olympic athlete who trained in its waters. In 1989, InterContinental Hotels & Resorts purchased the property and completed the first phase of renovations prior to its grand re-opening in 1990, followed by a second phase a decade later. Today, the InterContinental Chicago Magnificent Mile is a world-renowned destination hotel which embraces the contemporary traveler’s tastes while proudly acknowledging its own rich past. The property features 807 guestrooms, over 40,000 square feet of meeting and banquet space, and the largest fitness facility of all the downtown Chicago hotels. 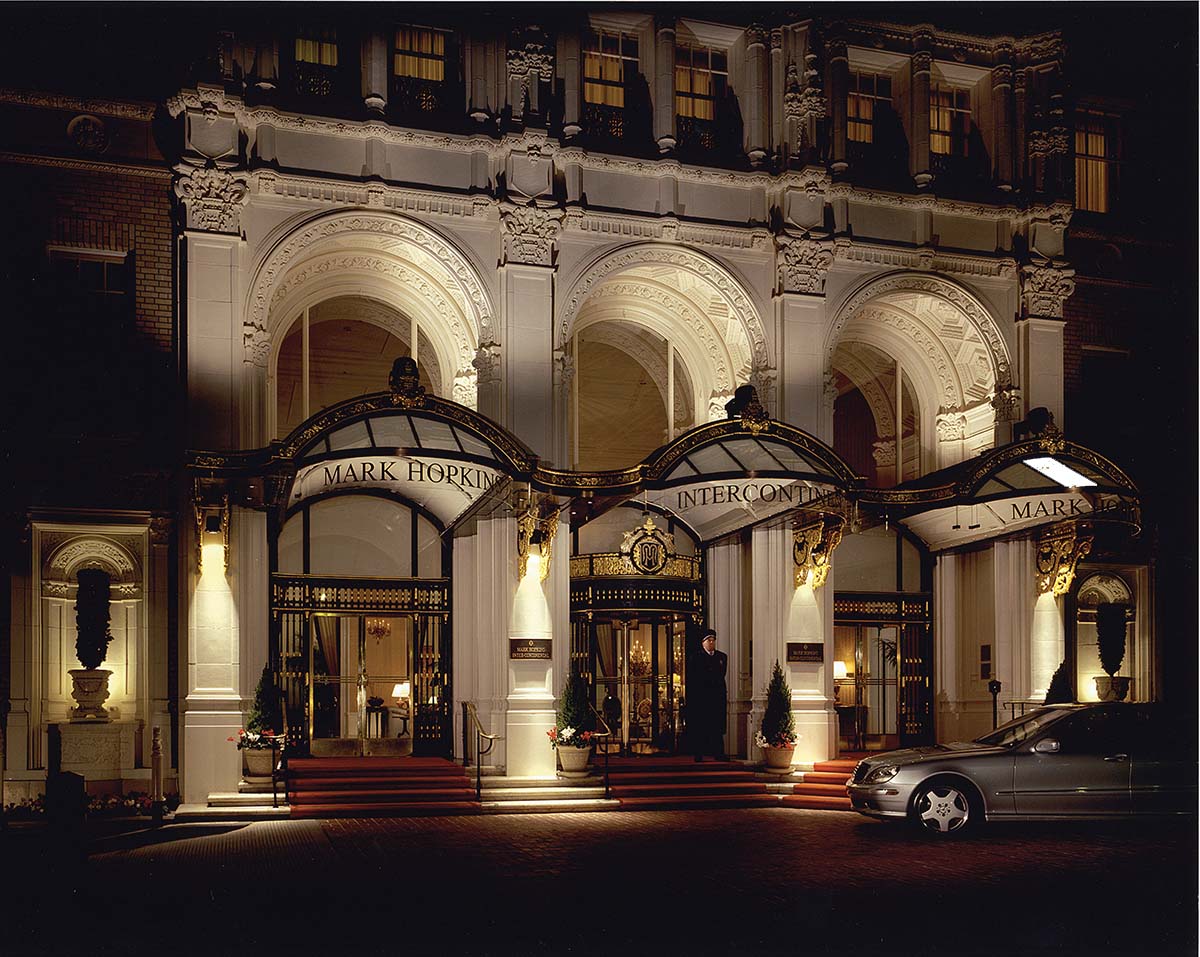 Opened in 1926, the property is the former 40-room mansion of Mark Hopkins, one of San Francisco’s “Big Four” who founded what became the Southern Pacific Railroad. Hopkins’ wife, Mary, insisted on building the house but died before the house was finished in 1878. The property was then destroyed by the 1906 earthquake and fire and was replaced by the San Francisco Art Association, now known as the San Francisco Art Institute. In 1925, hotel investor George D. Smith bought the property and built a luxury hotel, which opened on December 4, 1926. The InterContinental San Francisco Mark Hopkins became an immediate part of San Francisco’s history, as royalty, statesmen, political personalities, and celebrities have stayed at the hotel since it opened. 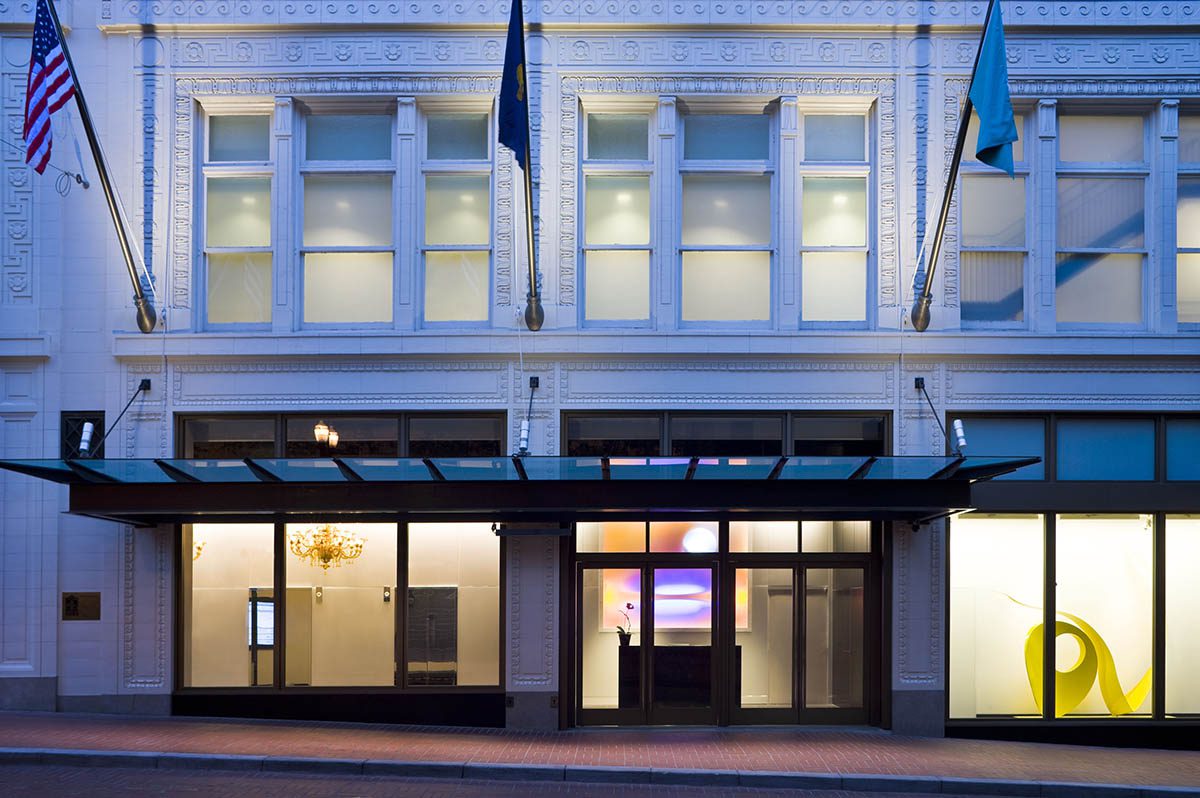 Once one of the largest retail outlets west of the Mississippi, the historic Meier & Frank building in downtown Portland, Oregon is now home to the Nines Hotel. The building is now listed on the National Register of Historic Places and is located in the epicenter of Portland’s retail corridor in Pioneer Square. Taking inspiration from the building’s original purpose as a department store, the Nines is a fashion-forward hotel and even derived its name from Meier & Frank and being “dressed to the nines.” 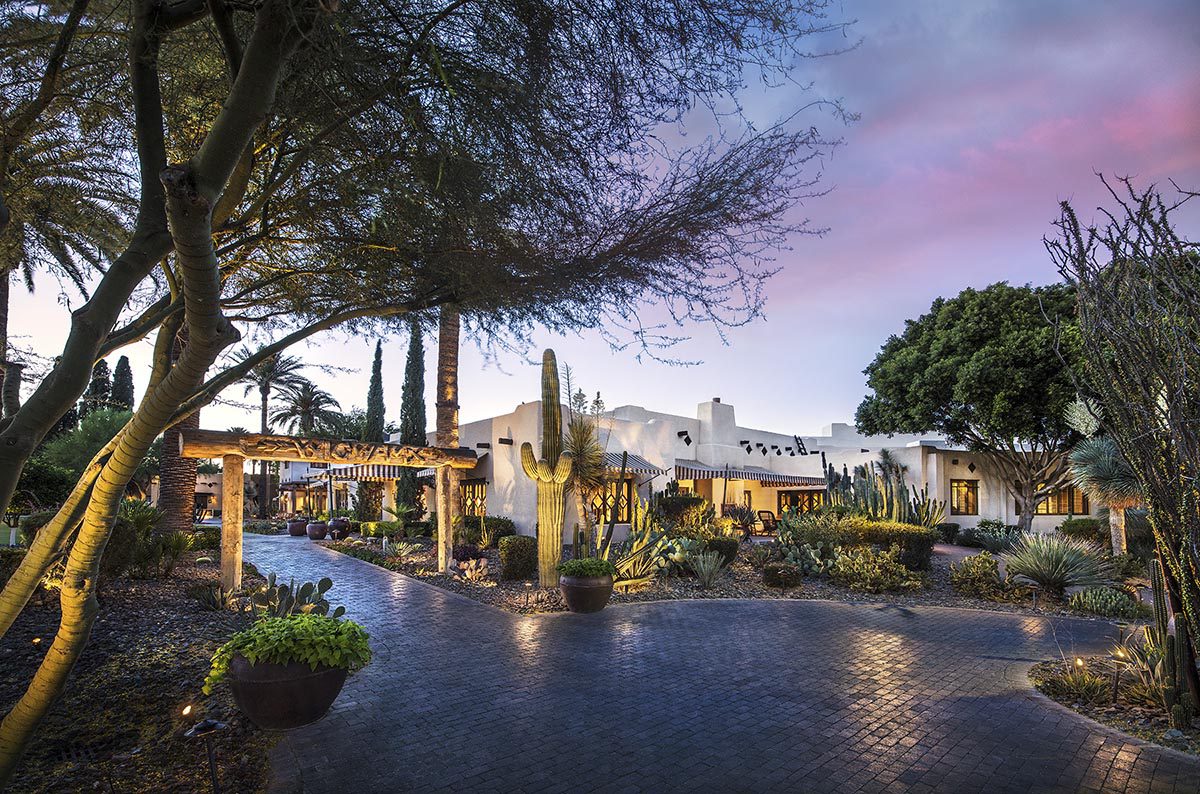 The Wigwam: 100 Years of History

Rooted in rich history, The Wigwam, in Litchfield Park, Arizona celebrates the Centennial Anniversary of its Organization House this year. Originally established as housing for Goodyear Tire & Rubber executives who oversaw cotton farmers in 1918, the Organization House and its nearly 16,000 acres quickly grew into so much more. A perfect combination of location and the ideal weather got executives thinking that the property should be more than housing: a holiday destination for families in the winter months. Shortly thereafter, The Wigwam officially opened its doors as a resort in 1929, and has since grown into a world-class resort, catering to travelers of all tastes with 54 holes of championship golf, a serene and welcoming spa, delectable cuisine throughout the property’s five dining outlets, three expansive swimming pools, and more. The resort is celebrating its milestone, with the Centennial Thank You Package. 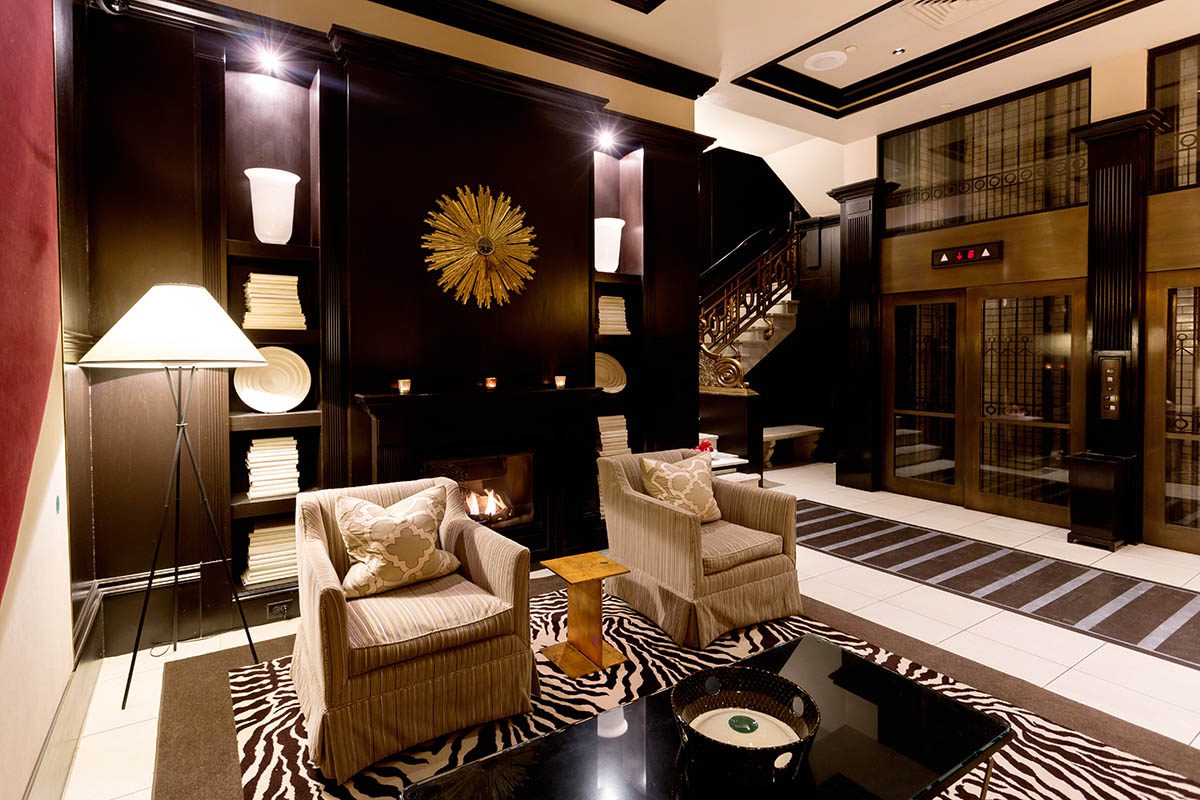 Boston’s XV Beacon has a rich heritage of repurposing — the boutique hotel’s building was built in 1903 and designed by renowned Boston architect William Gibbons Preston. Preston is best known for designing the Museum of Natural History, now Louis Boston, in Back Bay and the International Trust Company Building. Before becoming XV Beacon, its address was home to notable tenants such as Boston Transit Commission in 1905, the Rapid Transit Commission in 1906, and The Boston School Committee from 1923 until 1999. And looking back even further, the site was also once home to the Bromfield Mansion, built in 1722 by wealthy Boston merchant Edward Bromfield. 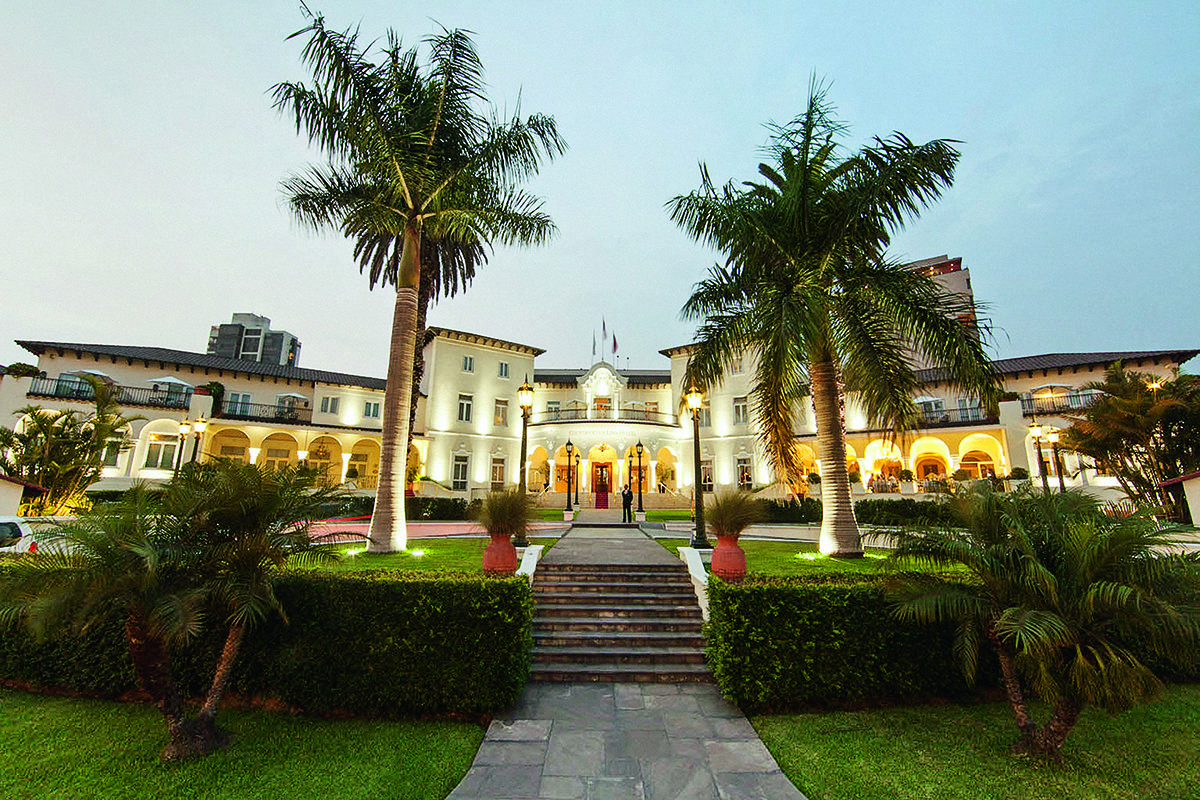 Country Club Lima Hotel has a rich background that links the now modern San Isidro district with historic Pre-Hispanic Lima. The property was established in 1927 as a clubhouse for members of the Lima Golf Club and a tea house for Lima’s polo players. Due to its popularity, Javier Prado avenue was built to provide easy transport from the hotel to downtown Lima. Today, the historic Grand Dame hotel welcomes guests following the completion of an expansive remodel, led by design architect Francisco Lopez Bustos, that marries modern comfort and luxury with the property’s legacy steeped in rich culture and history. Between Country Club Lima Hotel’s 300 pieces of art and colonial furniture on permanent loan from the Pedro de Osma Museum, gourmet Peruvian cuisine served at Perroquet Restaurant, specialized treatments at Yaku Spa, and English Bar serving up 60 critically acclaimed Pisco Sours a day, the hotel offers an enriching Peruvian escape for all types of travelers. 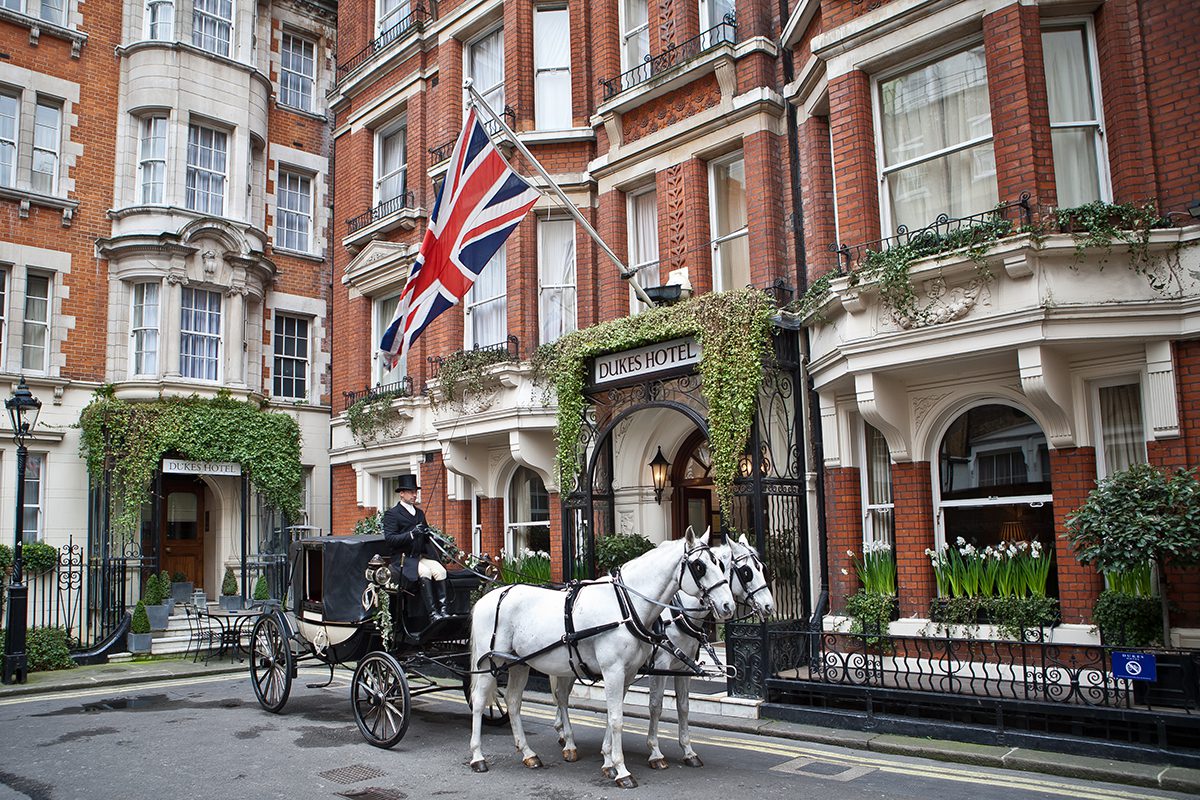 DUKES LONDON has a longstanding history with British royals, dating all the way back to 1532 when King Henry VIII bought the convent occupying the historic courtyard at DUKES in St. James’s Place and built St. James’s Palace. The Palace remained a royal residence until the mid-19th Century, when Queen Victoria made Buckingham Palace her home. It is also documented that during Charles II’s five-year reign from 1660, the courtyard around DUKES led to the house occupied by Barbara Villiers, the Duchess of Cleveland (and one of the King’s mistresses.) Before becoming DUKES in 1908, the courtyard housed the building originally utilized as the London Chambers for the sons of Britain’s aristocracy. Today, the quintessentially British property welcomes guests to enjoy an intimate stay in any of the 90 recently refreshed accomodations, including the all-new signature Deluxe Rooms. After a day of exploring St. James Mayfair, guests can retreat back to the hotel for mouth-watering British fare at GBR, or toast with a world-renowned DUKES martini at the legendary DUKES Bar. 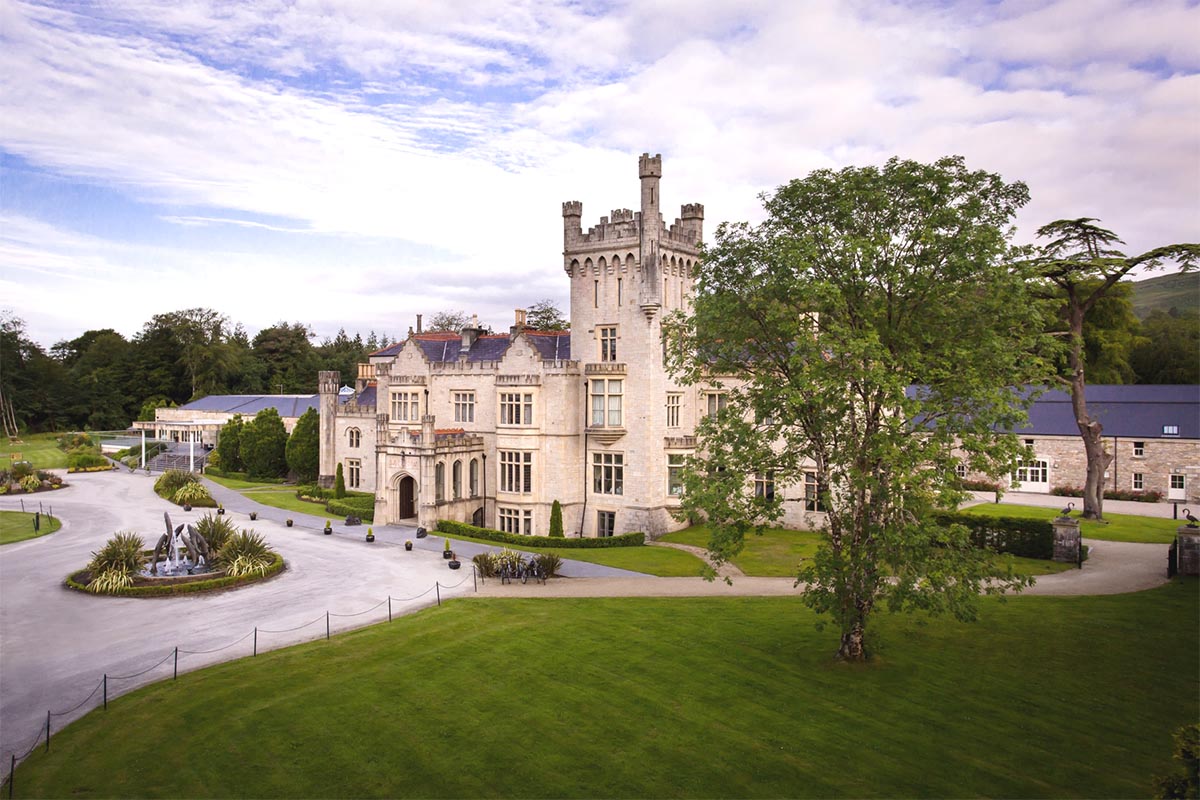 Nestled at the water’s edge of Lough Eske in Donegal, Ireland, Lough Eske Castle is a five-star castle hotel offering travelers timeless allure and luxurious, contemporary accommodations. Dating back to the 1400s, the castle first served as home to the O’Donnell Clan, the founding fathers of Donegal, and was later opened as a hotel in December 2007. Lough Eske Castle now features 96 guestrooms, seasonal culinary offerings, and Spa Solís & Gym with an ice fountain, sauna, steam room, and an infinity pool. Fresh, local Irish produce is served at in-house restaurant Cedars Grill, as well as a collection of more than 60 fine whiskeys in the Gallery Bar. Guests can also enjoy afternoon tea or a quiet read in the drawing rooms. 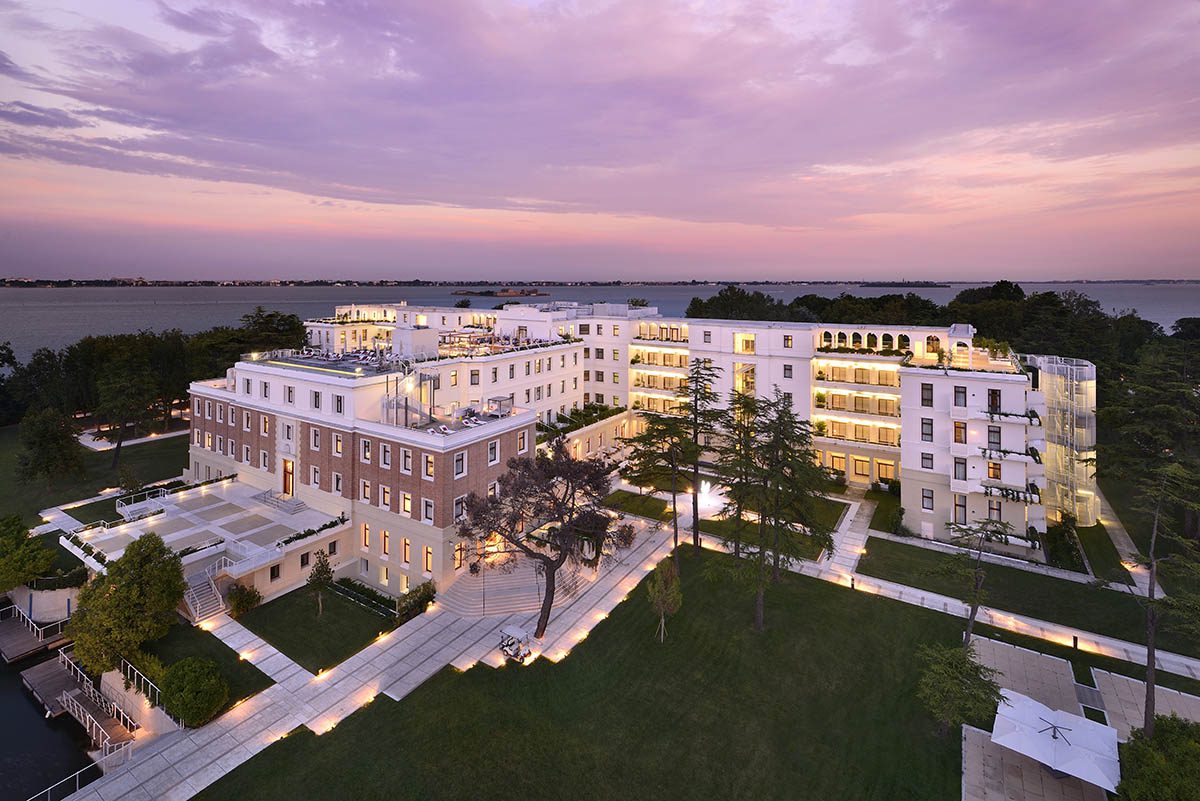 Before the Isola delle Rose was home to the JW Marriot Venice Resort & Spa, the green spaces and 20th Century buildings served as a clinic for respiratory diseases. The island’s location in the Venetian Lagoon created a climate with a breeze that kept a constant stream of fresh air circulation, ideal for setting up a clinic. It closed during the First World War and re-opened in 1920, adding the church and a men’s club, which now houses Dopolavoro – the restaurant overseen by Michelin-starred chef Giancarlo Perbellini. The island and clinic became a small community, based around the soil’s production of vegetables, flowers, and olive trees before the clinic officially closed in 1980. Today, the buildings have been restored and turned into the 250-room resort, which also features JW Retreats, the ultra-luxury accommodations for pure tranquility and privacy. Just a 20-minute complimentary boat ride from Venice’s St. Mark’s Square, the resort features multiple pools, dining facilities, breathtaking views of one of the world’s oldest cities, and Venice’s largest spa, GOCO Spa