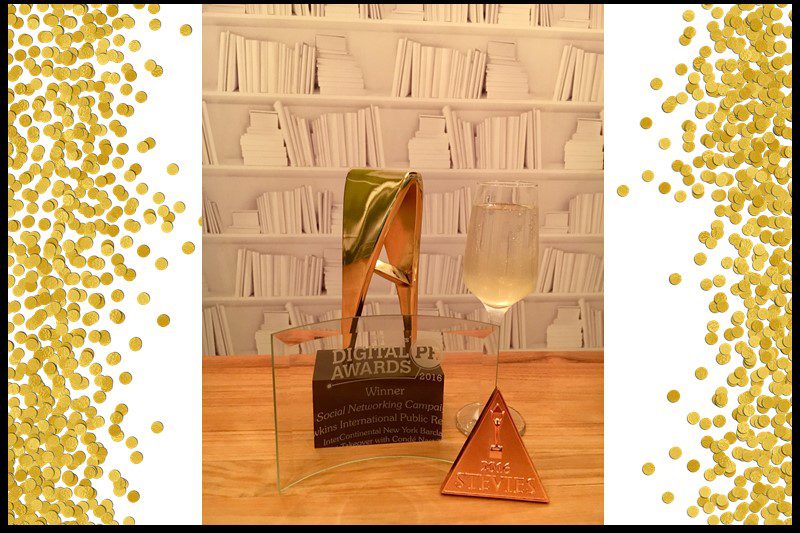 At Hawkins International, we pride ourselves on our goal-driven, innovative and integrated approach to impacting our client’s storytelling. With that, Hawkins International PR’s Digital Team saw the upcoming relaunch of InterContinental New York Barclay and our client’s desire to create an award-winning digital campaign to go above and beyond. Last week, we were honored to help achieve that goal, as were named the 2016 Gold HSMAI Adrian Award winner in the newly-introduced PR Innovation category, the winner of Best Social Networking Campaign at the PR News Digital PR Awards in addition to receiving honorable mention in the Snapchat Communications category, and bronze award recipient at the Annual Stevie® Awards for Women in Business for Communications or PR Campaign of the Year.

We’re thrilled to recognize our team’s accomplishments, and with 2017 right around the corner please reach out to digitalteam@hawkpr.com to discuss implementing your next award-winning campaign.

InterContinental Hotels Group, one of the world’s leading hotel companies, recently celebrated the reopening of the newly-renovated, InterContinental New York Barclay, which made its grand debut to New York society in 1926 as one of the original “Railroad” hotels. For generations the hotel served as one of New York’s most preferred addresses and officially reopened its doors at the end of May following a $180 million, 20-month top-to-bottom renovation. While Hawkins International Public Relations (HIPR) was tasked with generating traditional press coverage to promote the new and improved property, we also knew that we had an exciting opportunity to tell an engaging story via social media to celebrate reopening and reach a younger demographic than ever before.

Essentially, The Barclay had nearly completed their extensive renovation when we officially began working together. Without any additional flexibility for budget in terms of executing an out-of-the-box social media activation, we knew we wanted to do something creative and innovative, but also something organic that would not require a large out-of-pocket budget. We ultimately partnered with the digital team at Condé Nast Traveler for a behind-the-scenes tour of the new and improved hotel through the outlet’s Snapchat channel. The three-minute photo and video tour provided their followers with a rich, all-access sneak peek into the property and celebrated World Gin Day to highlight the hotel’s new bar, The Gin Parlour – a top priority for the client.

What made this activation so innovative was that it was completely uncharted territory for both The Barclay and the InterContinental Hotels brand overall, as well as the Condé Nast Traveler team. It involved taking a creative risk for both parties, and really marked a significant turning point for the 90-year-old hotel, indicating a transition into a new era – both physically and digitally. As an agency, we had already secured pre-opening coverage in top tier outlets such as The New York Times and New York Post, but this was a prime example of how we were able to work hand-in-hand with one of The Barclay’s top tier media targets to support the reopening in an innovative way and generate unique and buzzworthy coverage.

Over the past 90 years, The Barclay has always tried to capture a very niche audience: the affluent international traveler with an appreciation for the finer things in life, seeking a quintessentially New York experience. However, the hotel had built a reputation as being very formal, reserved, and almost unrelatable to the younger generation of future potential guests. While the typical Barclay guest is over the age of 35, the property team specifically wanted to use the reopening as the perfect opportunity to introduce themselves to a more youthful, social media-savvy audience and give them an authentic look into the updated hotel and new offerings, like their signature restaurant and bar, The Gin Parlour. Our marketing objectives for the activation were:

Our source of innovation for this project came from a combination of chance, research and inspiration. Ultimately, this activation came to life after many hours of brainstorming, strategizing and planning. Without much of social media presence, we knew we had to partner with an influential thought leader in the travel space to help tell the story and highlight the hotel. We looked at our various contacts in the industry from journalists to bloggers to Instagram stars and decided to get in touch with the digital team at Condé Nast Traveler. They were very interested in the chance to collaborate together, and we ultimately agreed that tapping into their Snapchat audience would provide an inventive partnership opportunity to try something completely new for both brands.

We worked with their team to synthesize their key learnings since launching their Snapchat, and after multiple conversations and storyboard sessions, we came up with the hotel tour concept and began planning the run of show along with The Barclay property team. Overall, it was a team effort that was inspired and exciting from the very beginning for all parties involved, and we believe the consumer response as well as the brand reactions clearly demonstrate that sentiment.

Our overall goal was to identify the right partner to craft an authentic narrative and generate buzzworthy social media coverage for The Barclay, ultimately introducing them to a younger demographic. They also generously cross-promoted The Barclay’s content on other channels to support the Snapchat tour, which led to additional growth and reach for the hotel. This activation was deemed an overwhelming success according to various quantitative and qualitative metrics and we saw the following results:

However, one of the most exciting results was the direct feedback we received from the digital team at Condé Nast Traveler. Not only was The Barclay tour one of the most-viewed stories in their Snapchat account’s history, but they were so impressed with the audience response and engagement that they decided to officially launch an entire “Hotel Tour” Snapchat content series – making The Barclay the very first featured property!